When the Trek Means As Much as the Destination 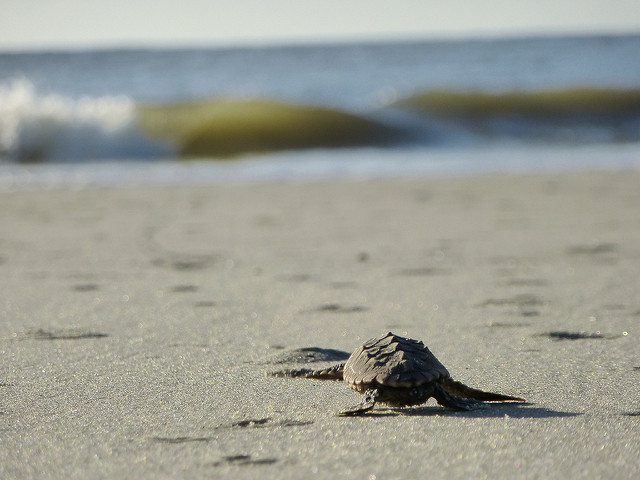 “Strength and growth come only through continuous effort and struggle.”

I was having a powersation with a good friend of mine, Henoc Muamba, the other day. For those who don't know, Henoc is a stellar pro-athlete who has played for the NFL. He’s also a motivational speaker, an entrepreneur, and someone who's great with people.

As we spoke, he told me how he liked my message about pain and discomfort. "You're talking about the importance of those things that we so often see as negative,” he said.

"It reminds me of sea turtles."

"Sea turtles?" I asked. "What do sea turtles have to do with anything?"

He went on to tell me that sea turtles are these amazing little creatures that are slowly becoming extinct. Their species are in danger.

He continued on, stating that a giant mother turtle will lay her eggs on the beach meters away from the ocean. She does this by digging a hole in the sand and laying hundreds of eggs in it. She’ll cover the hole up so predators can’t get to the eggs. Then she'll leave the eggs behind and return to the ocean.

Like any sane person, my initial thought was, "What kind of mother abandons her newborn children?"

Well, when baby sea turtles hatch they are, in a way, orphaned. They're in a hole that’s probably pitch dark. It could take up to a week just to dig themselves out. When they finally do, (and there's only a small percentage who actually get out of the hole) now they must make the trek across the sand and into the sea.

It's what happens during this trek that makes all the difference. These sea turtles, now out of their hole and their mother's covering, are exposed to certain elements before they reach the ocean. There are predators threatening their lives, waiting to eat them. There is debris everywhere in their path. But most of all (and what is probably most crippling) is there are people trying to help them.

You'd think that by us trying to assist baby sea turtles that we'd be doing a good thing, right?

What is actually detrimental to their growth and maturation are people who pick them up and throw them in the ocean. When the sea turtle climbs out of the hole, it's developing its strength. While the turtle makes its way through the sand, it’s developing its fins. And if those things don’t develop once they get to the ocean, the sea turtle won't be able to thrive.

They’re called sea turtles for a reason. They might struggle in the hole. They may even suffer in the sand. But they flourish in the sea. That is their element. But they won't be able to survive because they weren't given the chance to become fully equipped to swim.

Like the sea turtle, a lot of us don't realize that we are often being tried for a reason. We are being forced to develop, strengthen, and better ourselves for our one true element. We've got your eyes set on the prize. But we've got to get there first.

I think this story of the sea turtle can be anyone’s story. We experience a constant cycle of climbing out of the hole and moving across the sand into the ocean. What happens on the way from the hole to the ocean is that people get in our way. People try to push us into what they think is the right direction when they don’t know our purpose. In the end, they actually end up stunting our growth.

How would you ever reach your goal unless you went through pain? The road to success is not easy nor is it comfortable.

You would not be equipped for your goal without the pain. You would not be able to handle that position you wanted without first experiencing a bit of discomfort. If pain and discomfort were easily avoidable we'd never reach another level.

Today, I want you to embrace pain and discomfort along your journey to the ocean. Let them take you to new heights. They're necessary for your growth and maturation. Reach your ocean.